The Internet as a crowdsourced “Über-Archive”?

In the beginning of October 2011, I took part in a conference in Sao Paulo, where the „Possible Futures” of archives have been discussed (initiated by Giselle Beiguelman and Ana Magalhães / both University of Sao Paulo in cooperation with Ars Electronica Linz). I experimented in theory on the topic of the internet as a kind of „Über-archive“, confronted Encyclopaedia Britannica with Wikipedia on the topic of Knowledge transfer and was asking about the power of images and illustrations as well as the challenges and borders concerning participation today. 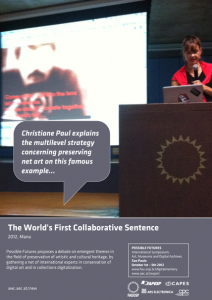 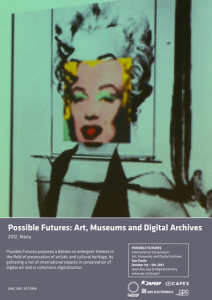 Archiving means collecting and selecting, organizing and preserving; it means translating and transferring; it means evaluating, putting in context and safekeeping, as well as making accessible, and so on… Archives are never completed or complete; most are constantly being revised and expanded, and are so complex that a concrete query is absolutely essential in order for archives to serve as sources of useful enlightenment.

Is the Internet proceeding according to similar principles?

Archives are set up to gather together the knowledge of the world in a particular area.

Seeing the internet as a sort of über-archive that provides information on a broad meta-level—thus the use of the German word über, that means both “above all” and “about”—must, of course, be scrutinized in light of the real facts and circumstances. What is being presented to us here and where does this information come from? Who has input/posted this material? How old is it? … One is also confronted by questions such as these when one uses archives.

It seems to me that there’s a question that’s even more important than the just mentioned matter. The central question raised by the über-archive internet since having developed into Web 2.0 is: What can I contribute to this knowledge?

Without praising Wikipedia, but when one considers the subject of participation on the internet, then the first thing that comes to mind for most people is the online encyclopedia. This example shows how successfully participation can function nowadays and, at the same time, clearly brings out the limits of participation. Since February 2012, 500 million individual visitors a month have logged on to Wikipedia and gone on to access 18 trillion articles.[1] When the Prix Ars Electronica began honoring Digital Communities in 2004, Wikipedia shared the first Golden Nica in this new category (with a project entitled “The World Starts with Me”). An article in that year’s Prix Ars Electronica catalog made reference to a Wikipedia policy that, due to the tremendous diversity of contributors with their wide-ranging ideological predispositions and origins across the face of the earth, was making a conscious effort to generate neutral knowledge. Nevertheless, a 2011 research project conducted by the Oxford Internet Institute shows that Wikipedia propagates a strongly Western and above all European picture of the world, though it also displays a clear disparity between North and South. More than twice as many articles are contributed to Wikipedia from Europe (776,000) than from the United States (342,000). They’re followed by Asia (125,000), Oceania (38,000), Africa (28,000), South America (27,000) and Antarctica (8,000).[2] Several comparisons of the Encyclopedia Britannica and Wikipedia reveal similar quality standards, but that Wikipedia is simply faster and covers our world to a much broader extent. Whereas years pass before a printed encyclopedia is revised, errors in Wikipedia content are recognized more quickly and revised in an average of only two minutes (according to remarks by Austrian legal scholar and university instructor Viktor Mayer-Schönberger of the Oxford Internet Institute at a conference in Vienna in early September 2012.)

Now, if one considers the fact that Wikipedia consists mainly of entries by Europeans and North Americans who actively work on and administer this wiki, and looking at the map that the production and dissemination of user-generated content on Google is manly done in the United states and to a much lesser extent in Europe (mainly with Germany, the Netherlands and Norway) and Japan, then the picture that emerges makes it understandable where images and definitions of general validity are being produced.

Artists Galia Offri and Mushor Zer-Aviv, a couple from Tel Aviv in Israel, have dealt with precisely this issue. They not only wanted to know what visual information the online encyclopedia worked with; since 2010, they have also been investigating how and why illustrations on Wikipedia are discussed and then either retained or discarded. Back in December 2007, The New York Times reported that MIT Professor Philip Greenspun had contributed $20,000 to finance key illustrations by artists. In an e-mail, Greenspun wrote:

“In comparing the Web versions to the print versions, I noticed that the publishers’ main contribution to the quality of the books was in adding professionally drawn illustrations [...] It occurred to me that when the dust settled on the Wikipedia versus Britannica question, the likely conclusion would be ‘Wikipedia is more up to date; Britannica has better illustrations.’”[3]

This initiative designed to grant commissions to illustrators was a matter of controversy among Wikipedians who eschew commercial activities in their communally generated effort. The “Wikipedia Illustrated” project shows, however, that there’s also another phenomenon at work here: subjective perception. Text submissions can be formulated with consummate objectivity and precision, but illustrations always transport emotional content and engage people’s emotions. How universally valid can illustrations be? How technical or artistic should (or may) they be? The boundaries tend to get blurry.

In Galia Offri and Mushon Zer-Aviv’s “Wikipedia Illustrated” project, the artists started to create 26 illustrations (one for each letter of our modern Latin alphabet). They began by reconnoitering Wikipedia and picking out articles that offered them maximum possible latitude in designing their images to accompany particular texts. Entries selected for illustration included “Ash heap of history,” Doppelgänger,” “Fight-or-flight response” and “Philosophical zombie.” It didn’t take long for Wikipedia activists to react. Of interest here is not only how diverse the reactions were but also how much more emotional the discussions of contributed images were than the corresponding discussions of text entries. It became apparent that the artistic identity of the contributions can’t be negated, and that this is precisely what got some Wikipedians so riled up. For the artists, this raises the question of whether images had to be “historical” before they could come across as distanced, objective and factual, and comply with Wikipedia guidelines.[4]

Since we’ve now reached a point at which history is being recorded on Wikipedia, it’s very interesting to analyze which contributed images have succeeded in gaining admission to the annals of the online encyclopedia. The image by Galia Offri is indeed to be found illustrating the English-language “Doppelgänger” article on Wikipedia, and it’s on the Spanish page as well.

But there’s an unillustrated Wikipedia article on the subject of “Doppelgänger” in German, the language in which that now-widespread word got its start. The same holds true for the counterparts in most other languages.

Since Wikipedia is categorized by languages and not by regions (which, by the way, I consider an interesting experimental model for the presentation of the world’s knowledge), I also checked out the Portuguese article, which I found was not accompanied by an image. With the French article, I found an icon that generally refers to the theater. The Russian and Ukrainian articles feature Henry Van der Weyde’s 1895 photograph of English actor Richard Mansfield, who achieved fame and success in his starring double role in the “Strange Case of Dr Jekyll and Mr Hyde.” This is impressive evidence indeed, and one can spend hours comparing the images used to illustrate the same term in Wikipedia articles in different languages. One final comparative example is the illustration accompanying the Czech Wikipedia article on the subject of “Doppelgänger”: a drawing of a naked man based on the image engraved onto the gold plaques on board the Pioneer 10 and 11 spacecrafts launched in 1972, whereby the purpose of the plaques is to provide aliens with information about the existence of human beings and the location of their home planet. And even though a naked woman was standing beside the man on the original plaque, the Czech Wikipedia article on the subject of “Doppelgänger” simply extracted the naked man from NASA’s image, duplicated it and juxtaposed the two guys. (And, after all, the Wikipedia article is entitled “Doppelgänger” and not Doppelgängerin, the female form in German.)

So what does this mean?

Artists like Galia Offri and Mushon Zer-Aviv show us that there are laws of the game and rules within the internet. They limit us to a certain extent. Nevertheless, there is free space to contribute and  (according to Geert Lovink) we need this artistic and creative contributions and collaborations for the deconstructing and reshaping of the very foundations of our today’s network society[5]. If written or spoken language is a major border to let more people collaborate and participate, we need in addition more pictures and illustrations, we need to create experiences and translate information visually.

If the Information Age originated with people like Otlet and Wells and their endeavors to democratize knowledge by providing and then increasingly facilitating access to information, then we currently find ourselves in the Participation Age. We can co-determine what is input into the worldwide servers, what they output and how it’s done. This is a right and privilege of our time. And even with the knowledge that we’re not the proprietors of these servers worldwide and don’t have it in our hands how things will really go down in history, at least we’ve gotten our foot in the door (german saying).

This entry was posted in Allgemein. Bookmark the permalink. 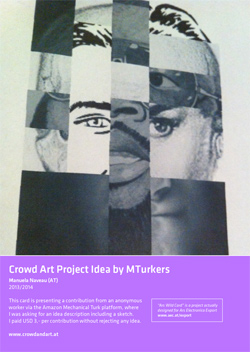